I’ll get the warning over first so that we can get to the fun stuff of Kevin’s second day in London. Because of my lack of internet access/room in my backpack for a laptop, obviously I wasn’t posting hot off the press updates regarding our trip. So lucky me, I have four days to catch up on while also setting up my new surprise (more info to come!) and settling into a routine again around Oxford. This means that over the next 48 hours, a lot of blog posts will be released. Chances are you will miss the first or the last or one of the ones in between–did I cover all my bases there?–so just keep an eye out and read thoroughly. Did you hear that? STALK MY BLOG! Just not me, please, that would be expensive and a little creepy to be honest.

We shall now travel far back in time to a distant day known as January 2, 2012, where we last left our two characters exiting the Westminster Tube station and stepping into the light of their second day in London.

One would think that the sky was trying to make amends for the bleariness the day before, because there was hardly a cloud in the sky and everywhere was covered with this lovely shade of light blue. Kevin was spoiled; he had seen Westminster Abbey and the Houses of Parliament lit up by floodlighting the night before (you know what, I’m going to pretend that I am posting this on time and just going to reference the days as yesterday and today so that I don’t get too wordy; you’re welcome) and then today saw them backlit by crystal blue and white sunlight. Even better for him, we were ahead of schedule and had about 30 minutes to kill before our tickets for the London Eye, so I took him by 10 Downing St, the home of the Prime Minister, and up to Trafalgar’s Square and Nelson’s Column. We didn’t really go far into Trafalgar’s due to time constraints, but at least he was able to see it. I feel like that is how a lot of our trip, especially London, ended up being…we may not have been able to tour these places because of time or money, but we still could see it and put mental images to the words we have absorbed in our heads and could feel the history and aliveness of the locations. And that sort of experience is free 😉 Just seeing the place is half the point after all.

All I can say about the London Eye is thank goodness we had the foresight to order our tickets online ahead of time. The line to just get the tickets had to have been at least an hour, but all we had to do was walk up to an machine, type in our last name and confirmation number, and our tickets were spit out at us, cutting our waiting time down to the 15 minutes to actually board the Eye. There you have it, all I can say about it. Okay, not really. I know that Kevin liked the Eye more than I did on my second trip around a gigantic ferris wheel on which you are enclosed in a giant plastic tube (Mom and I did the Eye when we went to London in 2009). I don’t mind the heights; I do mind the enclosed space, today worsened by a couple of rowdy Italian toddlers. I also find the Eye a bit pointless. London’s buildings are primarily around the exact same height, so there isn’t much of a skyline to ooh and ahh over while you take the 30 minute trip around. The highlight is definitely seeing the Parliament building, alone almost worth the steep price and half hour of Italian children. 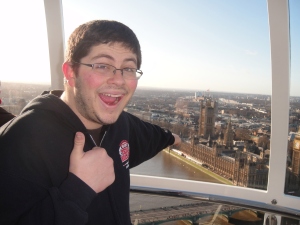 Kevin points to Houses of Parliament on the London Eye

After we were able to breathe fresh air again, we made our way to the Tower of London, the historic royal residence most widely known for its role as prison and execution site, neglecting the royal apartments and war fortress aspects of the site. We would have made it to the Tower a lot faster than we did–not that we were slow but we would have been even quicker–had Kevin not scolded me for always being in a rush and walking faster than anyone else in the family could keep up with. I believe his exact argument was that there is a middle ground between the slow stroll of our mother and my marathon run, and that would be the speed he walks at. As soon as I tried to keep pace with him, my legs were seriously itching to take longer strides or something! They had a mind of their own at that point and that mind had one goal: Get to the Tower.

I love the Tower. I loved it when I went in 2009 and I loved it today. The only differences in my love for it were the weather (no rain, but a cold best described as biting) and my ability to contain my excited freak outs to wide eyes attempting to absorb and commit to memory every nook and cranny and signpost of the place. 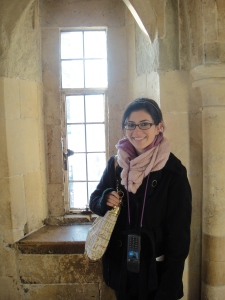 Me in my ancestor Edward I's former apartments in the Tower

We went ahead and did the completely worth it audio tour which took us around the Medieval Palace, the Norman Remains back from our dear friend William the Conquerer (there will be a history quiz for everyone at the end of the trip), the imprisonment areas and the execution grounds, an exhibit on suits of armor that I sucked up and went through for my brother, and general history of the place. We did not see the Crown Jewels; Kevin is a guy after all and I have already seen them. As such we finished the Tower in a few glorious hours and met Janosz at the British Library, our final tourist stop for the day that had been meant for yesterday.

Let’s face it: I’m a nerd, Kevin is a nerd, we both love books, and the British Library is just pretty darn cool apart from the no photography rule including photos without flash. They have manuscripts and paper fragments that date back all the way to the 3rd century, an original King James Bible from the 1600s, the handwritten manuscripts of Jane Eyre, Pride and Prejudice, and The Canterbury Tales. They have pages out of DaVinci’s notebooks, and there was a temporary exhibit on the correspondence regarding the imprisonment, trial, and subsequent execution of Mary, Queen of Scots, and Elizabeth I. There were actual letters written by Elizabeth herself!!!!!!! Kevin pointed out how clear her penmanship was, and he was right. Most of the documents from that time period are illegible despite being written in English, but I was able to read an entire one of her letters without needing an English-to-English dictionary. The Library also has lyrics from the Beatles handwritten by the men, and the coup de grace was one of the four remaining Magna Cartas. I promise I won’t turn this into more of a history lesson, just know that this is the British equivalent to the Declaration of Independence.  In fact, the Declaration is based on the Magna Carta. We ended our trip to the Library at closing time, nearly getting trapped there because we were hidden back in the Conservation Exhibit learning how they preserve the specimens and apparently security couldn’t find up. The three of us almost had that nightmare where you get locked in a museum overnight come true. At least books wouldn’t come alive, and we’d have plenty of reading material to pass the night with.

Dinner was at O’Neill’s Irish Pub, where we had a French waitress who said “Goodnight, thanks for coming” to us at least nine times and who didn’t understand one of Kevin’s and my weird improvised conversations that make no sense to anyone but each other and therefore called it a “debate of inaccuracy”. She was pretty funny though and commiserated with the three of us on the British’s obsession with mayonnaise.

One day down, three more to go. Keep eyes out for them!